This device is clearly marked as an MK802+ on the case, and is often sold as such. It however has 1GB of RAM and an A10s chip inside. The paper manual mentions "AK-212MinPC". The board is marked as "ST-G2", together with the kernel version strings, this led us to the manufacturer.

Incidentally, that's the same android image that is running on the Megafeis A08.

There is a special button to trigger FEL mode. You can reach it through the bottom-left hole of the top cover of the device. 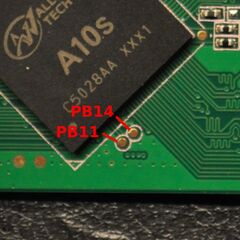 Bad routing: Not a UART!

On the board labelled VER:1.0, due to bad routing, the two pads which were meant to be the UART instead turned out to be PB11 and PB14, rendering them useless. You will have to resort to a MicroSD breakout board to get serial on this device.