This is the most popular HDMI stick out there. While the original idea came from the FXI Cotton Candy, the MK802 really opened up the world of HDMI sticks.

Many devices are currently named MK802 as a result. Some use the same case, but have different innards (MK802+ and Semitime G2). The MK802II is a complete redesign, but uses an A10 as well. The MK802III and MK802IV are not allwinner based, and use a rockchip SoC instead.

Rumour has it that many clones were made, so who knows, if we get enough devices documented in our wiki, we might see some severe motherboard differences.

plus on a usb stick: debian-stretch-DI-alpha8-armhf-netinst.iso from Debian Installer (I hope these links stand the test of time).

Connect HDMI and usb keyboard - the installer may show on the monitor, or maybe on serial. Serial is essential if you want to install a non-gui debian.

Please report here if anyone tries to modify this to use the correct mk802 device tree. (note: I did try this now, and it failed to run the kernel. This could mean I don't have a true Rikomagic MK802, or it could mean that the default sun4i-a10-mk802.dtb in Debian is wrong. My 'mk802' is marked 'DDR3/1GB' on the back.... If you try, then leave a copy of the pcduino dtb next to the new dtb, then you can swap in uboot by 'setenv fdtfile').

note Mainline has been enhanced with Debian kernel build notes.

The FEL button can be found by placing a pin into the hole in the bottom left corner on the top cover of the device. Pressing when powering up triggers FEL mode.

The device is factory rooted but so far ADB over USB hasn't been possible. To use ADB install a SSH Server like SSHDroid and start up the service. With the information provided by the Android App you can remotely log into the device(the login prompt displays the password. Type "adb shell" to enter ADB mode. 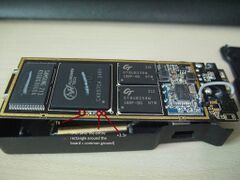 To remove the mainboard, be really careful, as all the connectors are wedged in. First release the two accessible clips of the transparent bit around the host connector, you will need this extra mm of space (don't push it further, or you might break the third clip). Then, try to wiggle the female hdmi connector free from its hole in the case. Then, start working the micro-usb-connector, use 2 plastic tools to push the whole of the motherboard away from the case, from each side of the usb connector. After some careful wriggling you should be able to get the motherboard out.

The TX and RX pins for UART 0 are next to the SoC. A good place to solder the GND connection is on the ground plane that runs along the side of the board. More information is available at our UART howto.

Below are some pictures of a very heavily maimed mk802. It had led a hard life at its previous owner, who had crudely opened the device (broken clips and lifted USB OTG ground pads) and who badly drilled holes into the case for ventilation. Then there were the tar deposits (heavy smoker) on the usb host and micro-sd connector shields, and the fact that the usb host connector was badly worn...

If anyone has a cleaner device, feel free to upload better pictures here.

There should also be a green PCB version available. This has a much later timestamp (at least 1234), but still mentions 94V-0 and E233305. The layout looks the same, but the FEL button seems to be missing.