The A20 Olinuxino LIME2 is an OSHW board produced by Olimex.

The board is marked as A20-OLinuXino-Lime on both the top and bottom of the PCB.

Note that it is not marked as Lime2. The Lime2 variant can be distinguished by the presence of two dram chips on the top of the board between the SoC and the USB connectors, also the ethernet phy is on the bottom of the board instead of the top.

Use the A20-OLinuXino_Lime2 build target. _FEL version is also available for USB booting.

Use the a20-olinuxino_lime2.fex file. (Please note that this fex file adopted DRAM clock setting from the Lime2's predecessor - only dram_tpr4 differs for unknown reasons. Using this fex file the DRAM is clocked with just 384 MHz, which costs some few percent performance depending on the application used.) 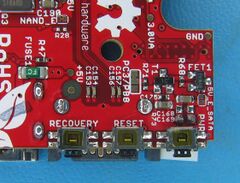 Different ethernet PHY is used depending on board revision Each of those designs have quirks at gigabit speeds, with slightly different symptoms:


A possible cause for packet loss only in master or slave mode is failure to seed or align with RGMII source-synchronous clock (this is newest suspected cause for rev. A-E boards but an older guess of the cause being clock calibration seems not ruled out).

A possible cause for packet loss only for Micrel PHY is a bug fixed since mainline linux v5.1 and unfixed in mainline u-boot (as of v2020.07).

Proper fix for rev. F and newer is to apply trace length compensation at the PHY.

A simple general workaround is to avoid speeds showing package loss, either by advertising only lower speeds, or by turning off auto-negotiation and setting one specific lower speed, or doing similar advertising/fixation at the peer host.
Mainline u-boot supports environment variable disable_giga for Micrel 9031 PHY since v2017.09; i.e. setting disable_giga in u-boot environment should work for rev. H-L boards.
Linux supports changing speed and auto-negotiation with ethtool or systemd (see option advertise in either man ethtool or man systemd.link).
Beware: You may need additional changes with older linux or u-boot.

A workaround for rev. A-E boards is to force the device into master mode, either by fixating device to only offer master mode or by fixating peer device to only offer slave mode.
Beware: This workaround has the adverse effect of complete network failure at any speed with a peer device in master mode!
Mainline linux supports forcing master or slave mode since v5.7 which should be possible to control from ethtool v5.8 or newer.
Mainline u-boot supports option RTL8211X_PHY_FORCE_MASTER=y for any Realtek RTL8211x PHY since v2016.05, and limited to Realtek RTL8211B/C PHYs since v2017.01 (i.e. it is ignored on newer revisions of LIME2); it is enabled by default for defconfig A20-OLinuXino-Lime2 (since v2016.05 intermittently and) since v2020.04; it is not enabled for defconfig A20-OLinuXino-Lime2-eMMC (available since v2017.09).
Beware: You may need additional changes with older linux or u-boot.

Current approach in mainline u-boot of unconditionally compensating at MAC require different values for rev. F-G2 as for rev. H-K.

Olimex fork of u-boot probes and apply compensations conditional to i2c eeprom information about board revision. Maybe that can be ported to mainline u-boot.

Changing device-tree to use PHY-mode RGMII-ID (not RGMII), and rely on driver-specific default compensations, has been succesfully tested to work with rev. H-L board.

Tests require recompiling u-boot to not apply other ethernet quirks, and then use a device-tree binary patched like this:

If this works reliably for all three board revisions, solution is probably to first get a patch like this (applied for another board since v5.13) accepted in mainline linux, and then have mainline u-boot drop current quirks.

Rev. A-E would fail to work in master mode, because workaround for a GMAC quirk was accidentally disabled since v2017.03).
Fixed since mainline u-boot v2020.04.

Rev. H-L would fail to work or lose packets at 100 megabit or gigabit speeds, because Micrel PHY driver was not loaded by default.
Fixed since mainline linux v5.5 and mainline u-boot v2021.01.

The internal GPIO headers appear to be mirrored compared to the original Lime boards [1]. Due to this there are specific A20-OLinuXino-Lime2-UEXT adapters, however as of 2014-09-28 these do not appear to be available directly from the Olimex shop.

See the main Bootable_SPI_flash article for generic guides on how to boot from SPI flash. With SPI flash it is possible to use SATA or network boot without any need to use an SD card for storing the U-Boot bootloader.

Since rev. K all Lime2 boards are equipped with SPI NOR flash.

In case you have older revision, it is possible to add it yourself, as this requires soldering wires to 3 pads on the empty NAND socket in order to get access to the PC0,PC1,PC2 pins.

PMIC AXP209 can charge LiPo battery and it has DC-DC bust-up converter to power the board from battery.

If you connect the battery when the board is powered off, it will not power on automatically.

Unlike other sunxi boards the Olimex boards don't use the JST XH 0.1"/2.5mm header for SATA power but the smaller JST PHR-2 header normally used for connecting LiPo batteries.

There are known cases where Lime2 boards are failing in the wild. The main suspects are DRAM clock speed and CPU core voltage. For more information see [Hardware Reliability Tests].

DRAM is clocked at 480 MHz by the hardware vendor (in fact even 532Mhz is mentioned in the blog). The board uses somewhat non-standard resistors for ZQ calibration (ZQ = 330 Ohm, SZQ = 330 Ohm), but at least they seem to be the same in Lime2 revisions from Rev.B to Rev.E according to the board schematics. Still it's best to always mention the board revision in the results table in order to avoid any surprises.

Having done runs on a larger set of boards, initial test results looked appalling. Machines that where known to have caused trouble in the past, failed within the hour. Others kept going for a few hours actually. We did notice temperature variation influences. On a Monday, the heating in the building was broken and the ambient temperature was only 20 degrees Celsius and 3 boards ran overnight without a problem. On Wednesday the heating was fixed and the ambient temperature rose to 23 degrees Celsius and all three boards had crashed. All of the initial 6 test subjects crashed and failed at their stock 480 DRAM frequency setting!

Lima-memtester was used for testing. The full tests results can be seen in this sheet, and can eventually be modified into table below.

There is a clearly marked UART0 connector on the edge of the board beside the ethernet connector. All you have to do is attach some leads according to our UART howto.