The A20 Olinuxino LIME is a low-cost OSHW board that fits in the palm of your hand. This board is produced by Olimex and can be purchased for about 33€. A20-OLinuXino-LIME looks identical to Olimex A10-OLinuXino-Lime, except for the more powerful A20 processor.

There is a second version of the A20 Lime (with 1GiB of RAM and Gigabit ethernet), called the Olimex A20-OLinuXino-Lime2.

The board handily reads "A20-OLinuXino-Lime" on the back.

Official images can be found here.

Use the A20-OLinuXino-Lime_defconfig build target.

You can attach several Olimex LCD modules to the LCD connector (LCD_CON). You will need a 1.27mm pitch to 2.54mm 40 pin cable though. 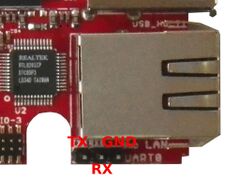 There is a clearly marked 3 pin 2.54mm header which exposes UART0, just attach some leads according to our UART howto.