I don't have a device here but fortunately Frank was so kind to test some stuff and provide data. Here is a sysfs dump of /sys/devices/ made while running SinoVoip's 3.10.65 kernel and there a preliminary RPi-Monitor template (VDD_CPUX currently wrong, everything else should work with legacy kernel). Please look at all the graphs below to get the idea how to benefit from RPi-Monitor.

Then it's just knowing the pan.baidu.com link and starting like this

In case it's password protected you'll be asked for it and in case you're downloading a directory you're asked which of the contents to load (you can specify individual parts then too). Works amazingly stable and fast since 10 download threads are started by default and broken connections are immediately re-established in the background.

Template here and results below: 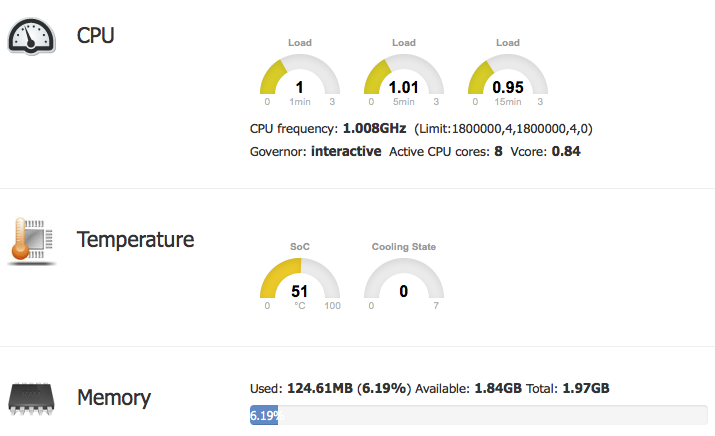 Xunlong's Steven Zhao claiming he did ODM for Banana Pi:

GPS data and timestamps in EXIF metadata seems to be correct and point to Xunlong's office :)

Dvfs settings that worked for me (undervolted and not recommended for general useage). Tested with cpuburn-a7, sysbench and cpufreq-ljt-stress-test running in parallel (temperatures just slightly exceeding 60°C under full load):

Lessons to learn from Xunlong

The H3 is a good example for this. Currently the Orange Pi's manufacturer ships OS images for their H3 based models with weird overvolted/overclocked dvfs settings: Only 2 operating points are defined:

This means at 1.2GHz or below the Vcore voltage is set to 1.3V and above to 1.5V (that's necessary for Xunlong since they falsely advertise the H3 as being capable to run at "up to 1.6 GHz"). If one chooses to not overclock and to create a sane dvfs table (see my working settings above) with a few more operating points the situation changes. Now the Vcore voltage will be adjusted dynamically between 980 and 1240 mV. I let a script run through all available cpufreq settings and monitored Vcore and temperature. The connection is obvious: The more voltage the more consumption/temperature:

Tests with just a heatsink

Below the same setup but with cpuburn-a7 running while decreasing the clockspeed. With Xunlong's overvolted settings the H3 when being under full load wastes more energy at 480 MHz compared to sane settings when running at 1200 MHz.

Again interesting: With Xunlongs overvolted dvfs table it's not possible to use clockspeeds above 1200 MHz under load over longer periods of time. With just a heatsink and without a fan the SoC's temperature gets always close to 80°C and then throttling occurs and lowers the maximum cpufreq while jumping between the insane 1.5V and 1.3V (that makes the difference). When using a sane dvfs table it's perfectly OK to run under full load with 1200 MHz for hours or days. Temperature doesn't exceed 60°C (ambient temperature of 23°)

Tests without a heatsink

In the meantime a 2nd OPi PC arrived so I did the tests again without heatsink. It's obvious how insane Xunlong's dvfs settings are in such situations (comparable to the situation with heatsink inside an enclosure). The temperature increases by a whopping 12°C when switching between 1.3V and 1.5V while being totally idle. And the difference between heatsink or not while idling at 1.5V is 10°C:

Again the test with cpuburn-a7: Without the heatsink and Xunlong's dvfs settings it wasn't able to operate above 1.2 GHz under full load since throttling occured and dvfs led to a voltage decrease from 1.5V to 1.3V. And the same as before with applied heatsink: when using the insane default settings then the SoC's temperature at the lowest tested cpufreq (480 MHz) is higher than compared to running with sane settings at the upper limit of 1.2 GHz:

Comparing both dvfs tables regarding consumption

Based on the dvfs table's entries it can make a difference of up to 0.6W idle consumption. If you chose the performance governor and use also Xunlong's overvolted settings the H3 idles at 1.5V consuming more than 0.6W more (while doing exactly nothing) than compared to sane settings. With sane settings it makes nearly no difference which cpufreq governor is used: With both interactive or performance the SoC stays cool and consumption differs not that much. But I still prefer idling at the lowest Vcore voltage possible and instead adjusting scaling_min_freq to a reasonable upper value -- see below.

With a connected display consumption is 0.3W higher and temperatures increase by 3-4°C. This also applies to the situation directly after a reboot when the display engine is active for approx. 10 minutes. Then temperature und consumption decrease when running headless (same applies to A83T and A20 -- not tested with any other SoC).

Static vs. dynamic settings with A83T

Same situation: Consumption/temperatures depend more on Vcore voltage than on actual CPU clockspeed:

Based on my measurements it seems like a good idea to choose the highest frequency value at the lowest Vcore voltage defined in the dvfs table for scaling_min_freq:

I ended up with the following settings being ideal for Orange Pi PC (jumping interactively between 720 and 1200 MHz and distributing USB IRQs accross all CPU cores):

Read through this refreshing comment thread (including all contained links). If not willing to do so stop already here. Grab longsleep's latest Ubuntu Xenial image for Pine64 and ensure that you've latest settings applied by doing as root

In the archive is the following:

What is it for? 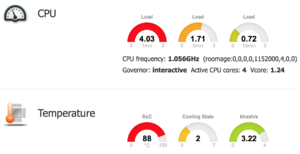 Using cpuburn-a53 you can do what the name might suggest: Burn your SoC and test throttling/emergency settings (be aware that you would have to power the board through the Euler connector otherwise sudden power-offs might occur if maximum cpufreq exceeds 720/816 MHz)

Cpuminer should be ready after doing a 'make install' from its source directory (look into the commented line in /etc/rc.local how to call it so that benchmark scores get monitored). The patched RPi-Monitor install provides an ability to monitor the khash/s rate which is nice if you want to explore how efficient improved heat dissipation works and how it might affect peak performance.

The most interesting part is Linpack. For the benefits (exploring data corruption due to heat/undervoltage) and installation hazzles please refer to the aforementioned Github thread.