This Tablet is an A10 MID style device with capacitive buttons on the front, metal back cover, the typical 4 screws and the slot for the internal speaker on the connector side.

There is no printing on the case. 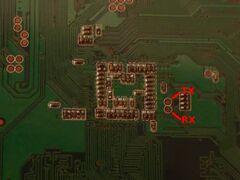 Remove the 4 screws. Now gently push your Plastic tool between the plastic outer edge and the metal back cover. Try to go around the whole board until you hear some clips pop, and do this until all clips have released. Be careful when opening the device, as the Wifi antenna is taped to the back cover.

On the back of the board, right next to the (back of the) SoC, there are two pads. All you need to do is solder on some thin wires according to our UART howto.