The M9 is an A31 based HTPC which was sold in two versions. Namely, the reduced functionality M9, and the A1000G Quad. The latter has two UART connectors, a very slightly different motherboard layout, and a SATA connector (using a GL830 USB-to-SATA bridge (that is SAT capable, therefore querying S.M.A.R.T. data and triggering selftests works)

This section explains how to most easily identify your device. For a development board, explain the name(s) printed on the board. For an android device, find out the strings as reported under settings.

Like any A31 device, there is little community interest and little support.

The device can be opened easily after removing 4 Phillips screws.

On the A1000G's mainboard there is a SATA port (connected to a Genesys Logic USB-to-SATA bridge) and a SATA power JST header. They're connected to a standardized SATA data+power connector on the case's top (normally hidden by a closed lid). By opening the lid standard 2.5" disks can be inserted into the slot. The connector is advertised as being compatible to the SATA Universal Storage Module (USM) standard. 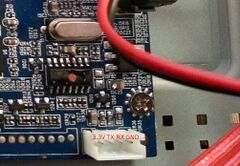