If a device is special, then feel free to provide a terse description of what makes this device so special. But terse, no novels, no marketing blurb.

Give a brief overview of the current status of support under sunxi here. If there is mainline support for either U-Boot or kernel, mention this too, but add the extra sections below.

Add MANUFACTURER DEVICE specific sunxi ROM images here. E.g. a livesuit image or some other linux image which uses linux-sunxi code. Do not put non-sunxi images here, they should live under See also. If no sunxi based images are available, this section can be left blank.

If there is mainline U-Boot support, add this section.

For building mainline U-Boot, use the MANUFACTURER_DEVICE target.

If there is mainline kernel support, add this section. 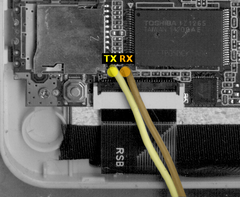 The TX and RX pads are located next to the Touchscreen ZIF connector, and the negative battery terminal provides the GND reference. Please review the UART howto for further information.

As an alternative to carefully boring a hole in the rear casing, the Rear Camera may be removed for convenient cable access