There is another similar version which has the following details but the board could not be booted. It has 2 Kingston D2516EC4BXGGB DRAMs instead of single and FORESEE 8GB NCEMASD9-08G eMMC instead of SKhynix H27UCG8T2ETR-BC NAND Flash.

On front and back 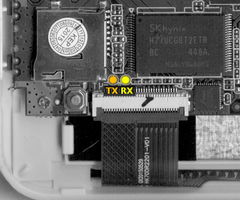 UART TX and RX can be found between the µSD connector, NAND Flash IC, and Touchscreen FPC connector. See the UART howto for further information.