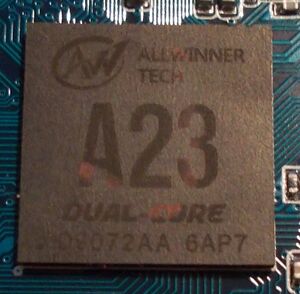 Some other documents were found online:

The SDK contains customized sources for U-boot, Linux, Android and buildroot. It also has a gnueabi cross compile toolchain.

Use the "pack" script under "A23/lichee/tools/pack" to build an image. (not tested)

Boot0 initializes the DRAM, basic clocks and loads U-boot from NAND or MMC. There is no boot1 on A23. Boot0 directly loads U-boot.

Allwinner has in the meantime published the source code for boot0 in their github repository.

Binaries of boot0 can be found in the SDK: A23/lichee/tools/pack/chips/sun8iw3p1/bin

There are 3 U-boot sources available.

Allwinner's SDK contains a customized U-boot, based on v2011.09. This works with either NAND or MMC. It contains drivers for LCD display, MMC, NAND, normal UARTs, USB OTG, RSB, PMIC, and the ability to update various images.

u-boot-sunxi has basic support for A23, which includes UART console (including R_UART) and MMC. Disclaimer: no one has actually booted a kernel with this yet.

There is a kernel tree currently available which contains a quick backport of the A23-v1.0 SDK, it is called "a23sdk_frankenkernel".

Patches for basic A23 support on mainline have been posted on the mailing list. You can also find them here.

The v1.0 SDK contains many binaries and is therefor violating the GPLv2 quite directly:

We are still waiting on action from Allwinner to resolve this.