The In-Circuit ICnova A20, also labelled "SoMPi", is a SO-DIMM sized System-On-Module which usually comes with the ADB4006 daughterboard sold by the same company.

On their website, In-Circuit mentions that they have a Board-Support-Package available, and that they are available for "linux driver development and adaptation", but no such code is available from their website or wiki. The device itself comes shipped with a totally unaltered cubieboard2 cubiez image. After several emails with requests for source code, a link to a buildroot tarball was eventually provided.

In their documentation, In-circuit GmbH happily states "Combining the power and software-ease of community proven embedded boards like: +Banana-Pi, Cubie, OlinuXino and PCDUINO3". The provided buildroot tarball clearly uses our sunxi-3.4 kernel, our classic sunxi u-boot, sunxi-tools, sunxi-mali and sunxi-cedarx, so this "community proven" thing is clearly very uni-directional. It is not clear why In-Circuit chose this mode of cooperation with the sunxi community, but it leaves a rather bad taste in the mouth.

If you really want to build an embedded device around an Allwinner A20 based SOM, take a look at Olimex A20-SOM instead, or get one of the other Community devices.

The SO-DIMM System-On-Module has absolutely no discernable markings on it.

On the ADB4006 daughterboard, below where the SOM sits, it reads:

On the back of the ADB4006 daughterboard PCB, the following is silkscreened:

Use the INCIRCUIT_ICNOVA_A20 build target. 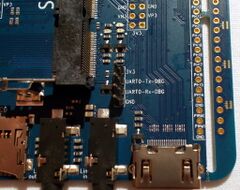 On the top side of the ADB4006 baseboard, there is a nicely marked UART0 connector. Just attached some leads according to our UART howto.

There are further headers with UART2/5/6/7 on the board, but they are unpopulated.

In-Circuit sometimes calls it SomPi but even the domain sompi.de has now expired (status 20150924).