Olimex A20-SOM is an A20 based development board from our friends at Olimex.

The board helpfully reads "A20-SOM".

When the A20-SOM is connected to the A20-SOM-EVB base board sold by Olimex and the LDO3 of the AXP209 chip is initially switched off by uboot (which newer uboot versions do by default), LDO3 should never be re-enabled. Doing so leads to immediate shut down of the AXP209 resulting in a crash of the board. The reason seems to be too much capacitance on the lines connected to the LDO3 output and non-effective voltage rate control on the AXP209 for LDO3, leading to excessive inrush currents and triggering the overcurrent-protection of the AXP. See this thread on the mailing list for more details: https://groups.google.com/d/topic/linux-sunxi/EDvEsbHHqQI/discussion 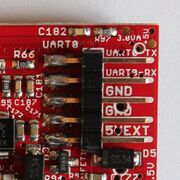 A nicely labeled UART connector is available, all you have to do is attach some leads according to our UART howto.

This type of device does not get rebadged.