The Allwinner Nezha is the first D1 based board made available to the general public. It was sold through several distributors, including RVBoards and Sipeed.

There are at least two known revisions of the board. The older version is silkscreened D1_DEV_DDR3_16X2_V1_0 on the top and does not have the AWOL logo. The newer version has the AWOL anagram silkscreened on the front (d1.docs.aw-ol.com being the official documentation website with the same logo), and the identifier D1_DEV_DDR3_16X2_V1_2 on the back.

The front side of both PCB versions has a variant of the Nezha logo.

The back also has a sticker containing a QR code, with the board serial number below it. Scanning the QR code reveals the following URL:

The device is are sometimes being shipped with an SD with Debian installed. Console logs: https://gist.github.com/heitbaum/e4dceeb7b236560b94cc66fce91cdd11

Sometimes the device only ships with TinaLinux in NAND. Console logs booting into TinaLinux: https://ovsienko.info/D1/minicom1.cap.txt

The Debian images for the D1 can be found here: https://ovsienko.info/D1/

It is unknown how to boot from any of those images on the NAND only device.

Work based on mainline versions of Linux/U-Boot is very much a work in progress, and nothing finished/merged is currently available.

The BSP U-Boot/kernel use a NAND layout which merges a pair of pages from consecutive blocks into a super-page. Mainline uses the physical layout as-is. So while SPI NAND contents are accessible from both mainline and BSP kernels, they are only usable by one driver or the other. For this reason, it is recommended to install mainline software to an SD card, and leave the SPI NAND alone.

Disabling the CONFIG_AW_SPINAND_SIMULATE_MULTIPLANE option in the BSP kernel should make its layout compatible with mainline, but this has not been tested.

You can build things for yourself by following the instructions below.

To build, you need a cross-compiler (riscv64-linux-gnu-gcc) and swig.

Boot firmware on the D1 consists of three parts, which largely correspond to the components used by 64-bit ARM SoCs:

Mainline OpenSBI fully supports the C906 CPU and the Allwinner D1 SoC out of the box since version 1.1. You should use upstream OpenSBI, not any fork.

For recent versions of OpenSBI that include Kconfig support, you can reduce the size of the firmware by disabling almost all of the drivers. The only necessary ones are FDT_IRQCHIP_PLIC, FDT_RESET_SUNXI_WDT, and FDT_SERIAL_UART8250.

Mainline U-Boot support is mostly complete, but is not merged yet. Booting Linux from the network, USB, and an SD card works. Some refactoring of the various sunxi device drivers is still needed before any RISC-V sunxi platforms can be upstreamed.

These commands will generate the file u-boot-sunxi-with-spl.bin which contains the entire firmware and can be written to an SD card, just like for ARM-based Allwinner boards. See Bootable_SD_card#Bootloader for flashing instructions.

You can also copy or symlink fw_dynamic.bin into the U-Boot build directory instead of exporting the OPENSBI variable.

BSP U-Boot is a heavily hacked U-Boot 2018-05 branch. Using it is not recommended. It is available at https://github.com/Tina-Linux/u-boot-2018

(This U-Boot also suit for Alleinner new chips after 2018)

The main change is the modification of Makefle to suit the Tina Linux build system.

There are some simple patches for port the BSP U-Boot to Buildroot: https://github.com/YuzukiHD/Buildroot-YuzukiSBC/tree/master/buildroot/board/awol/nezha-d1s/patch/uboot

This version has been modified so it can be built outside the BSP's build system, so it compiles with mainline GCC, and so it cooperates better with mainline firmware binaries. See the commit history for more details. Below is the process for building it and writing it to an SD card:

The D1 boot ROM can read the boot0 SPL from two different locations:

The location in sector 16 is incompatible with GPT partioning which by default uses 34 sectors. In gdisk you will have to reduce the number of entries in the partition table to ≤ 56 via the expert settings. So it may be preferable to write boot0 starting at sector 256 instead:

A boot message tells you which location was used for booting:

Note that boot0 does some magic like enabling the T-HEAD ISA and MMU extensions. Those stay enabled all the way through entering Linux, which expects the custom PTE format.

boot0 expects to load a TOC1 image containing OpenSBI and U-Boot (and a DTB). This is similar to, but incompatible with, mainline U-Boot SPL, which expects a FIT image.

The mainline U-Boot branch builds a mkimage tool which contains rudimentary support for making TOC1 images. Since a TOC1 can contain multiple items, we must create a config file telling mkimage where to find them. Use the following content, adjusting the path to OpenSBI as needed:

Now, continuing in the U-Boot directory, create the TOC1:

Now you can write this TOC1 to your SD card. Note the large (16+ MiB) offset! You will need to leave a gap before your first partition; 20 MiB should be plenty. (Or you can change UBOOT_START_SECTOR_IN_SDMMC in include/spare_head.h in boot0.)

If boot0 fails to load from the SD card sector 32800, it falls back to loading from the backup sector 24576. So it makes sense to write a U-Boot backup there:

The bsp Linux Kernel is available at https://github.com/Tina-Linux/tina-d1x-linux-5.4

Use the devicetree provided in RAM by the platform firmware (for U-Boot, this means $fdtcontroladdr). Do not load a DTB from storage.

Writing the kernel to SD card

You can create an ext4 partition that holds your kernel, but that partition needs to leave a gap at the start of the disk, as described above.

In this filesystem, place the kernel in /boot/Image and in addition to this, create the file /boot/extlinux/extlinux.conf that looks similar to this:

You can find a simple Buildroot usage at https://github.com/YuzukiHD/Buildroot-YuzukiSBC.

The community-run meta-riscv BSP layer includes support for the nezha-allwinner-d1.

If you have a Lichee RV 86 Panel then build u-boot with the lichee_rv_86_panel_defconfig instead.

The xfel tool has support for the D1 chip. Currently sunxi-fel (from Sunxi-tools) lists the SoC as unknown.

Use an adjusted copy of Sipeed's config file ( https://github.com/orangecms/RV-Debugger-BL702/tree/nezha ) with OpenOCD for RISC-V:

TODO: figure out the "examination"

Note: With the Debian image being shipped - http://mirrors.perfxlab.cn/debian-ports the fw_setenv and fw_printenv are not aligned to the saveenv location.

The default firmware environment for the TinaLinux board:

To get a valid callstack from an OOPS, you need to enable CONFIG_FRAME_POINTER or else the callstacks are not reliable. 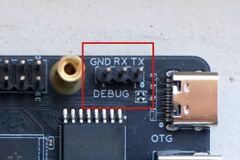 The DEBUG header at the top-right corner of the board can be used as a serial port. See the UART howto for instructions about how to attach to it. The default baud rate is 115200.

The test pin T6, as per the manual and verified, is the reset pin (RST). A wire can be attached to it, and for convenience, routed to one of the N/C (not connected) pins on the GPIO header. It can be used for test and development automation.

A simple strategy for test automation and bringup development is as follows:

To test an firmware/OS image, hold FEL, trigger reset, release FEL, then use xfel to bring up DRAM, load the image, and execute it. Watch the output on the UART, try input, and see if the device becomes visible on the network.

This can be fully automated, e.g., using another development board offering all the necessary interfaces. It can be instrumented via CI, e.g., as a GitLab runner using ConTest.