The H3 SoC support has matured since its introduction in kernel 4.2. Most of the board functionality for boards such as Orange Pi Zero Plus 2 are available with current mainline kernels. Some features (hw accelerated crypto, hw spinlocks, and thermal) are still being worked on. For a more comprehensive list of supported features, see the status matrix for mainline kernels. In addition, legacy 3.4 kernels are available in various work-in-progress git branches.

The Orange Pi Zero Plus 2 has a 26-pin, 0.1" unpopulated connector with several low-speed interfaces. It's marketed as Raspberry Pi-compatible.
Table below is based on Xunlong's board schematic and product page.

The Orange Pi Zero Plus 2 has another 13-pin, 0.1" header with several low-speed interfaces.

Unlike most other Orange Pi boards, the Orange Pi Zero Plus 2 can be powered through the Micro USB jack (being a normal USB OTG port otherwise) or via one of the Expansion Port pin headers (using 5V/GND pins).

The Orange Pi Zero Plus 2 runs the standard Allwinner BootROM when the SoC starts up. There are no buttons or connectors to select FEL mode so the BootROM will only enter FEL mode if a special SD card is present or if there are no valid boot options. For example if there is no boot option on the SPI NOR chip and no SD card is present then plugging the board's micro-USB port into a USB port on a PC will show up as a FEL device. Using Sunxi tools and issuing:

An 8GB onboard eMMC is present and supported by the Armbian image. 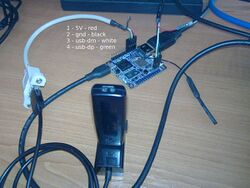 To make a trivial adapter you can use "pc case usb port" but you will need to rearrange the pins:

The UART pins are located next to unpopulated 26-pin header on the board. They are marked as TX, RX and GND on the PCB with barely visible letters. Just attach some leads according to our UART Howto.