From linux-sunxi.org
(Redirected from Xunlong Orange Pi One)
Jump to: navigation, search

Orange Pi One and Lite are H3 based development boards produced by Xunlong.

The One is clearly Orange Pi PC's little/smaller sibling. Compared to the PC the following is different: smaller size, 512MiB instead of 1GiB DRAM (still two DDR3L modules making use of the full 32 bit memory bandwidth), 2 USB host ports aren't exposed and the following is also missing: CIR receiver, microphone and TRRS jack for Audio/CVBS video.

The Lite features RTL8189FTV WiFi (shipping with a small external antenna connected to the u.FL connector between the USB ports), saves the Ethernet port but regains one more USB port, CIR receiver and microphone.

Xunlong chose a different voltage regulator on these two boards that requires software adjustments to get dynamic voltage frequency scaling (dvfs) working. Apart from that Xunlong tried to keep both small boards as compatible as possible to the PC so that all OS images for the PC work with One and Lite with just two drawbacks: Non functional dvfs without fex file adjustments and no WiFi without new drivers on the Lite.

OPi One PCB has the following silkscreened on it:

The H3 SoC support has matured since its introduction in kernel 4.2. Most of the board functionality for boards such as Orange Pi One & Lite are available with current mainline kernels. Some features (hw accelerated crypto, hw spinlocks, and thermal) are still being worked on. For a more comprehensive list of supported features, see the status matrix for mainline kernels. In addition, legacy 3.4 kernels are available in various work-in-progress git branches.

Use the orangepi_one or orangepi_lite (supported since v2016.05/v2016.09) build target. The U-Boot repository and toolchain is described in the Mainline U-Boot howto.

Use the .fex file for generating script.bin. Armbian maintains a bunch of 3.4.x patches for H3 devices. There you can also find the necessary patch set to support the new 8189FTV WiFi chip on the Lite.

Since the manufacturer did not provide new fex files when Orange Pi One has been released in early 2016 you might want to use Armbian's (community developed) fex files: orangepione.fex and orangepilite.fex since they support the different voltage regulator on these boards, the new WiFi chip on the Lite and implement community derived improved THS settings (dynamic voltage frequency scaling and optimized thermal/throttling settings -- look at the dvfs_table and cooler_table sections in the fex files above).

The Orange Pi One & Lite both have a Raspberry Pi model B+ compatible 40-pin, 0.1" connector with several low-speed interfaces. Warning: The header's orientation on these 2 boards is 180°, please check 'pin 1' marking carefully (especially if you plan to insert power through GPIO header)

Both boards will fail over to FEL mode if it doesn't detect a card present in the µSD slot. There is no dedicated FEL button.

Since Xunlong didn't provide new OS images with Orange Pi One's release users try to use images/settings for Orange Pi PC. While this seems to work and Ethernet and USB are functional on the One the logs get flooded with "ARISC ERROR" messages due to a different voltage regulator (full log):

On the Orange Pi PC the SY8106A is accessible through I2C and the H3's AR100 OpenRISC core tries to adjust the CPU core voltage (VDD_CPUX) this way. On One and Lite a different voltage regulator is used: the SY8113B (datasheet) is a step-down converter that can adjust its output voltage driven by two resistors. According to Xunlong staff on OPi One this is used to switch between 1.1V at 624 MHz and 1.3V at every cpufreq above. Users that looked a little bit closer discovered that the similar AX3833 is used on the first batch of boards instead (see Gallery and link to datasheet below).

To get reliable performance/thermal behaviour with OS images that use legacy 3.4.x kernels adopted fex settings are needed. Please have a look in the aforementioned fex files from Armbian that implement this correctly. Same regarding WiFi: Please see above where to get the necessary patches to get RTL8189FTV up and running (the good news: since OpenELEC team who fixed the drivers relied on 8189es driver already ported to mainline the necessary fixes can be easily used to get WiFi working with kernel 4.x too)

Xunlong advertises both boards as being only capable of running at 'up to 1.2GHz'. Since the SY8113B/AX3833 voltage regulator should only be able to switch between 1.1V and 1.3V this would prevent clocking the SoC higher than 1200MHz according to the common comments in the FEX files from various H3 SDK variants:

DRAM is clocked at 672 MHz by the hardware vendor. But the reliability still needs to be verified. One of the ways of doing reliability tests may be https://github.com/ssvb/lima-memtester/releases/tag/20151207-orange-pi-pc-fel-test (developed for Orange Pi PC). An adoption of this using a fex file suited for Orange Pi One's/Lite's different voltage regulator is available here (md5sum: e600db41f94446bb77224223fc1dc2a0 fel-boot-lima-memtester-on-orange-pi-one-v3.tgz). Use the fel-boot-lima-memtester-on-orange-pi-one script inside to test both boards.

We need still more test results in the table above in order to have more accurate statistics and finally pick a safe default DRAM clock speed for U-Boot. Preferably there should be at least 10 entries in the table (more is always better). And there are no "good" or "bad" test results. Even if your result looks very similar to the already reported results from the other people, please still add yours to the table! Because if people don't feel like reporting their "boring" results, then "interesting" outliers will unfortunately skew the statistics. Thanks!

Below is an intermediate analysis of the currently reported results, using the lima-memtester-genchart script (run the script using this page URL as the command line argument). Assuming that the Gaussian distribution is a good approximation, try to predict what percentage of boards is expected to pass the lima-memetser test at different DRAM clock frequencies. The lima-memtester page provides more information.

The boards have two LEDs next to the 40 pin GPIO header:

When using kernel 3.4 with Xunlong's or loboris' settings then the LEDs can only be switched on/off. By changing the definition in the fex files (see patch or the aforementioned fex files for the One/Lite OpenElec and Armbian use) both LEDs can be used the usual way (using different triggers and so on)

Xunlong sells also a cheap 2MP camera (an attempt to fix the driver's limited resolutions can be found here). Unlike Orange Pi Plus/2 that can directly connect to the camera module for the Orange Pi PC/One/Lite an 'expansion board' is needed (see gallery below). If you order from Xunlong simply tell them that you need the camera for Orange Pi One or Lite and they ship camera together with the small board.

When trying to use HDMI to DVI converters with Allwinner's 3.4.x kernel for H3/R16/A83T/H8/R58 a small fix has to be applied. The fex file has to be modified (and converted back to script.bin afterwards) so that the following has been added to the [hdmi_para] section:

Due to the position of USB and/or Ethernet jacks Xunlong chose to rotate the 40 pin GPIO connector by 180° so RPi HATs can still be used but will project over the board in the opposite direction than intended. Keep this also in mind when you want to power the board through GPIO pins 2/4/6 (2/4 being connected directly with DC-IN and 6 being GND)

Adding ports/connectors that are missing

The UART pins are located next to Ethernet / USB jack on the boards. They are marked as TX, RX and GND on the PCB. Just attach some leads according to our UART Howto. 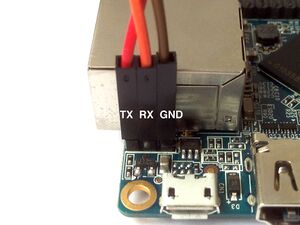 Please note that the boards are sold without any heatsink. This is just the tester's standard heatsink for all H3 boards now.

At the moment only OS images relying on Allwinner's 3.4.x BSP kernel are available for the boards. Most of them suffer from wrong settings for the different voltage regulator used on One and Lite, the only known exceptions are currently the Armbian images and OpenELEC for both boards and WiFi support for the Lite. Xunlong also released a new Android image for the Lite that should support the new WiFi chip and also work with the One (just based on assumptions and not tested).

In case you want to use other OS images with One and Lite be prepared to adjust fex settings to get thermal/performance settings right, that you need a kernel patch for the new WiFi module on the Lite and that all OS images except OpenELEC/Armbian use a horribly outdated kernel version 3.4.39 missing tons of fixes.