A typical China-made TV box, offered on eBay and various Chinese outlets. Comes with 4GB of DRAM and is comparably cheap for that.

The top has an "X96" logo embossed in the centre, in the lower right corner it reads "Mate".

Basic support merged in the respective mainline repositories, USB and Ethernet are still WIP. Since it uses the AC200 integrated 100MBit Ethernet PHY, it relies on pending mainline support for that IP to have working Ethernet.

Use the sun50i-h616-x96-mate.dtb devicetree binary from a mainline kernel, available since v6.0.

The PCB is mounted upside down in the case, so the connectors are all flipped over (USB, SD card, HDMI, Ethernet).

There is a FEL button on the PCB (behind the AV socket), but it is not accessible from the outside. To enter FEL mode, use the fel-sdboot.sunxi image written to an SD card.

The rear, white USB socket is connected to USB controller 0, a non-standard USB A-to-A cable can be used to connect using FEL. 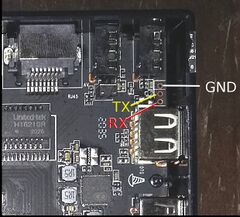 To get access to the UART pads, you have to open the box. There is a seal sticker on the device, which you have to break to get inside it.

Flip the box over and remove the two lower rubber feet on the bottom (the ones closest to the front). Remove the two screws that are hiding beneath. Now use a plastic tool to slide between the whole rim of the device and pry open the hooks that hold the bottom plate to the upper shell. The bottom plate can then be easily removed to open the box, the PCB is mounted to the upper plastic shell. Two more screws hold the PCB down there, and need to be removed to get access to the lower side of the PCB, to solder the UART wires.

The UART pads are located on the top right of the device PCB, between the USB and the IR connector, providing 3.3V RX, TX and GND signals, as pictured. The assignment is printed on the bottom side of the PCB. To solder some wires or pins, just remove the PCB (two screws). To route the wires outside the case, you could drill a small hole between the AV and IR connector. Once done, follow the UART howto.

There is an "X96 Mini" TV box, sometimes sailing alongside the Mate 4G/32G and 4G/64G versions. It seems to have 2G RAM and 16G eMMC, but has an Amlogic S905W SoC, so it's not compatible and not an Allwinner chip.

Some firmware image of unknown origin.