This HTPC uses the same formfactor as the Langcent H6S but has a different board and therefor different settings.

The board has "TXCZ_A20_V1.0" printed on it. (There are some other devices existing with different versions numbers such as TXCZ_A20_V3.0 but they have a completely different form factor. They do report using the same model and similar build number, though, so perhaps they're compatible.)

Issue: There appears to be some issues with the PHY drivers. This results in not being able to properly detect if a cable is connected to the ethernet port (it thinks there's always one connected regardless). If you're using a connection manager that tries to maintain a single connection you'll have problems.

Due to a lack of USB device ports, FEL is not possible. 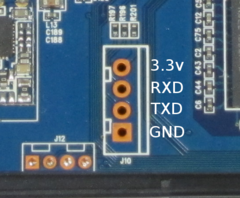 There are no screws, only plastic clips. There is one clip on each of the 4 corners and one in the middle of each side excluding the back (so 7 clips in total). Just turn the device upside down and gently push your plastic tool between bottom and top cover until they release.

There is a 4 hole connector labeled J10, all you need to do is solder on some wires according to our UART howto.

Manufacturer provided pictures of a pre-production board: