The NAND partition dumps can be found here.

For some reason if you extract the U-BOOT and script.bin from mtd0 it will result in seemingly corrupt or weirdly formatted data, making it unusable. Script.bin however can be successful extracted from memory using the sunxi-script-extractor tool.

Contains a single JPG image of the device boot logo.

The PocketGo-S30 is running ADB, allowing us to access the shell using `adb shell` in a terminal. You can dump the nand partitions onto the µSD card and access other information about the device here. This shell access is how most of the information here has been gathered. 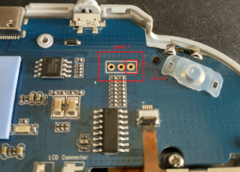 This section explains how to attach a serial port to the device. Make sure it refers to our UART howto. For a development board, you can just mention how to find the header with the pins and include a picture, and you can remove the warranty voiding warning.

Remove two screws on the back of the case. The back case will now pop free and reveal the battery. The battery is double-sided taped down onto the button assembly that holds the L1, R1, L2, and R2 buttons. You can peel it free with relative ease and disconnect it from the header on the left-hand side of the board. Remove the 4 more screws on the button assembly bar will allow it to be easily removed, giving you full access to the motherboard. Be gentle and pop open the little plastic tabs on the the LCD and joystick headers to open and slip out the ribbon cables. Also be sure to remove the speaker connector on the opposite side. You can now unscrew the last 2 remaining screws and remove the motherboard from the front shell housing. The LCD seems to be glued or taped inside the front housing, making removing it destructive.

UART pins can be found right underneath the battery and button assembly. They are the 3 unpopulated pins with a white rectangle around them. The port is enabled and functional, however, the kernel is not configured to use it. For some reason, there is also no output when u-boot is booting. UART howto

This device seems to have many different names associated with it, and it's hard to determine the original name. The motherboard has Miyoo353 on the silkscreen, but the Linux kernel and script.fex seems to call it zkswe_a33 internally. The most commonly used name and easily recognizable name is the PocketGo S30 or S30 for short.