The back button triggers FEL mode. 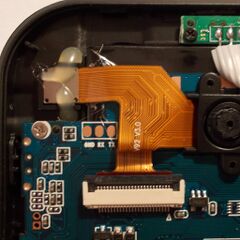 Remove the 2 screws on the connector side. The screen edge extends beyond the connectors, and with the device lying on its display, gently push the outer rim out with your plastic tool. You will soon hear the clamps pop.

There are clearly labeled pads, on the top left edge, near the camera, you just need to solder on some wires. For more info, refer to the UART howto.