For building mainline U-Boot, use the iNet_3F target. 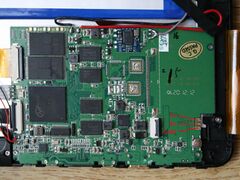 The aluminium back case is very hard to detach from the rest of the device. In most cases, it will have to be damaged (or at least scratched) to open the device properly. There are no screws to remove nor any kind of glue, but the sides of the back case are curved to cover part of the front plastic part, making it stay it place very firmly. It is advised to use a a plastic tool and start opening at the corners of the case.

The UART pads are exposed on the PCB, under the touchscreen ribbon cable, that has to be gently removed before soldering connectors. The pads are clearly labeled on the PCB: GND, Rx, Tx. Connectors can easily be soldered according to the UART howto. Ensure to cover the connectors with an isolating layer since the back of the touchscreen connector ribbon may have a conductive part.