From linux-sunxi.org
< Cubieboard
Jump to navigation Jump to search

Note: This is the FirstSteps for Cubieboard users.

Which is your Cubieboard model?

Currently, there are two batches of the Cubieboard developer board available.

It is important to identify which batch your Cubieboard is from, because the amount of memory has (currently) to be specified in your system image settings.

The Cubieboard is available in two packages, the Standard package and the Rich package.

The Standard package contains (from top left and counter-clockwise):

The Rich package contains (from top left and counter-clockwise):

Note: Some of the Cubieboards from the Indiegogo campaign may not have a suitable DC to USB cable. Check at Cubieboard/FaultyDCCable to see whether you are affected.

You can power your Cubieboard from either

You plug the USB cable to your computer (5V/500mA) or any other USB power supply (such as one to charge your mobile phone), and the other end (either DC or mini-USB) to the appropriate port on the Cubieboard.

Connect the Cubieboard to your HDMI display/TV using an HDMI cable. Note that there has been some issues with HDMI to DVI adapters. Also, if your HDMI TV cannot display 720p, then it might not be able to display properly on the screen. The Android image allows to switch later on to the 1080p resolution (see System settings in Android).

You can connect a USB hub to the Cubieboard and then attach a keyboard and mouse. Note that if you connect several devices to the Cubieboard, then you will need to provide more power (for example, 500mA will probably be not enough).

You can also look for a PSP power supply (PSP is a Sony game console), which has a compatible barrel plug and provides 5V/2A, just like the Cubieboard needs.

WARNING: DO NOT CONNECT THE RED LINE TO VCC ON UART(serial ttl connection). 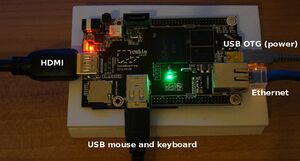 The Cubieboard connected and running. Power comes from the mini-USB port.

You powered the Cubieboard using either a USB to DC power cable or a powered USB to mini-USB cable. The Cubieboard should power on - the red POWER and green LED2 LEDs should light up.

See also this that shows the Cubieboard booting up using power from the USB OTG port. 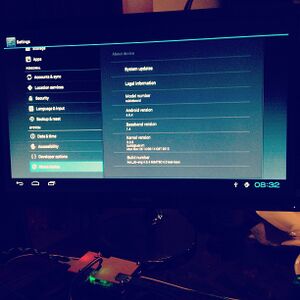 Android "About Device" page from Android

Power Off and On

Once you connect the Cubieboard to the power, it will automatically boot up.

The red Power LED will light up when your Cubieboard is running. Depending on the operating system, you may also see the green LED2 LED light up (it lights up with Android but not with the Linux distributions).

It is recommended to shutdown the Cubieboard using the shutdown facility of the operating system. If you use Android, search Google Play for a Shutdown utility and install it. Then, you can shutdown from that utility. If you upgrade the Android image on the NAND memory to [Release 2], then there should be a Shutdown app already present. If you use a Linux distribution instead, then you can either power off from the GUI or run

You can subsequently use the Power button to power on and off the Cubieboard. It is located on the left of the HDMI connector. You need to keep it pressed for a few seconds so that the Cubieboard starts up again.

You can force the Cubieboard to shutdown by keeping pressed the Power button for about 10 seconds.

It is possible to boot the Cubieboard from the network, or from a SATA disk.

You can find more details on the boot sequence at BROM

Installing images on the microSD card with BerryBoot

Berryboot is a simple operating system installation utility and boot selection screen, that allows you to put multiple Linux distributions on a single microSD card. To install it, you first need to copy the Berryboot system files to the microSD card. This can be done using the Android app or using a normal desktop computer.

Preparing the Berryboot microSD card on a Windows computer

See the page Bootable_OS_images for additional bootable OS images. If you cannot find your favorite bootable image in the BerryBoot menu, you can install it manually to your microSD card. These image files (not to be confused with pictures) should be written directly to the memory of the microSD card, which removes all data on that card. If you use a Linux distribution, you would use dd (after you unmount the microSD card using palimptest or gnome-disks). Help expand this section with more detailed instructions!

You can also install an OS on the internal NAND

If your board comes with a serial cable, you can connect to see the cubieboard u-boot and kernel messages.

If not, then you can get yourself an appropriate serial cable (normally a USB to Serial dongle which allows connection to the individual pins).

You can troubleshoot the Cubieboard by making use of the serial console. See Cubieboard/TTL for detailed instructions and an example output.