Orange Pi Zero is a small form factor board H2+ based development board produced by Xunlong.

Orange Pi Zero is currently supported by both mainline U-Boot and kernels.

For Orange Pi Zero, use the orangepi_zero_defconfig (supported since v2017.03) build target.

For Orange Pi R1, use the orangepi_r1_defconfig (supported since v2018.07) build target.

For Orange Pi R1, use the sun8i-h2-plus-orangepi-r1.dts

The Orange Pi Zero has a 26-pin, 0.1" unpopulated connector with several low-speed interfaces. 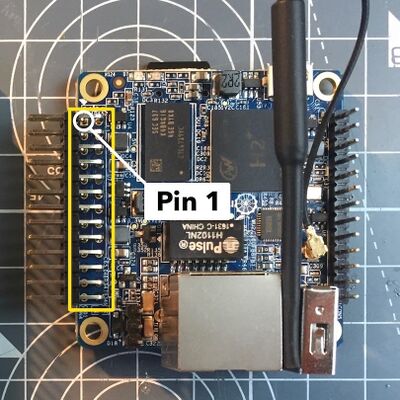 The Orange Pi Zero has another 13-pin, 0.1" header with several low-speed interfaces.

A cheap 'Expansion board' for this connector is now available exposing all interfaces (2 x USB, CIR receiver, microphone and combined AV TRRS jack) and can be ordered together with the board on Aliexpress. Attention: Expect problems when using the Expansion board to connect more USB devices when you want to power the board through the Micro USB connector (known to cause all sorts of troubles). Voltage drops affecting stability are likely to happen so better think about providing power through 5V/GND pins on the 26 pin header in this case.

The H2+ SoC used on this board seems to be a featureless H3 (no Gbit Ethernet MAC and no 4K HDMI output). Orange Pi Zero uses the same SY8113B (datasheet) voltage regulator as used on Orange Pi One/Lite that can adjust its output voltage driven by two resistors between 1.1V and 1.3V. DVFS configuration and settings for Orange Pi One/Lite work exactly the same on OPi Zero.

It should be noted that the official OS images from orangepi.org currently use broken settings leading to VDD_CPUX voltage remaining at 1.3V all the time and leading to unnecessary overheating (see here for details).

Orange Pi Zero unlike all other Orange Pi boards so far can be powered through the Micro USB jack (being a normal USB OTG port otherwise) or via one of the Expansion Port pin headers (using 5V/GND pins). 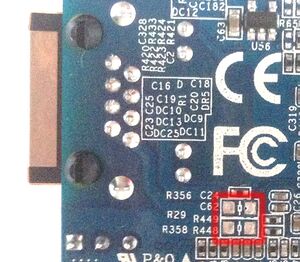 The board also provides a PoE (Power over Ethernet) option since Ethernet pins 4/5 and 7/8 are routed to solder pads (see picture on the right and below in gallery).

By soldering zero ohm resistors to R29 and R358 passive PoE providing 5V could be used to power the board. Note that 5V won't work over large distances (greater than ~4m) since cable resistance is too high and the voltage will drop.

If you plan to use a buck converter at higher voltages, remove R135/R136 (75 Ohm) as they will dissipate a lot of heat and may burn out! See the picture on the right and below in the gallery for which resistors to remove.

If you solder 0 Ohm resistors to R29 and R358 and power the Orange Pi Zero via Micro USB or GPIO as described in Powering the board then 5V power will also be output via the Ethernet port.

You need an 802.3af/at compliant power supply like the TP-Link TL-POE10R to use the Orange Pi Zero with a PoE switch. This is the same procedure you would use for any other non-PoE enabled device.

The Orange Pi Zero runs the standard Allwinner BootROM when the SoC starts up. There are no buttons or connectors to select FEL mode so the BootROM will only enter FEL mode if a special SD card is present or if there are no valid boot options. For example if there is no boot option on the SPI NOR chip and no SD card is present then plugging the Orange Pi Zero's micro-USB port into a USB port on a PC will show up as a FEL device. Using Sunxi tools and issuing:

Putting u-boot on SPI NOR

You can write this image to the SPI flash to boot from fel:

Because u-boot can't actually interact with the flash once it's booted you need to write u-boot to it from linux. With a mainline kernel you need to enable the SPI NOR drivers in the kernel config and add a DT node something like this:

This will give you /dev/mtd0 that you can use to write u-boot to the flash.

Once Linux is running you could mount a filesystem from the flash etc.

SPI NOR on older boards

Pre dec 2016 boards do not have SPI NOR Flash installed. So you need to install your own.

To put u-boot on SPI NOR you first need to solder on an SPI flash. The W25Q128FVSIG is 16 megabytes, cheap and easy to source and the correct package for the footprint on the orangepi zero PCB. Soldering it on is relatively easy. Clean the footprint with solder wick first to make it flat and be careful of all of the small SMD passives close by.

When using 2017-09 mainline u-boot with the above options enabled should produce a binary that already works out of the box. However, if you are using a SPI NOR flash from a vendor that isn't compatible with Winbond or Macronix, then you might have to enable/implement drivers for the SPI NOR flash chip that you are using.

On OPi Zero PG10 pin seems to be used to implement WoWLAN. XR819 module contains an own ARM core and iw list when used with Allwinner's BSP driver mentions:

The JTAG sel pins that seem to be used to enable JTAG at chip power on aren't broken out but you can enable JTAG on the expansion connector once uboot has started with this command (add it to boot script and compile boot.scr again to make it permanent):

OpenOCD configuration should look something like this (based on the config from this page in Japanese):

This is a little bit fragile but it works well enough to set breakpoints in the kernel with GDB so should be useful when debugging drivers etc. 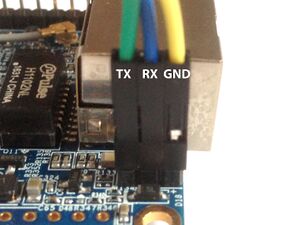 The UART pins are located next to Ethernet jack on the board. They are marked as TX, RX and GND on the PCB. Just attach some leads according to our UART Howto.

According to CNX Software, a long term support version of the zero board will be released in the future. Shenzhen Xunlong Software claims the LTS board will have improved board design with lower power consumption and SoC temperature, along with (unspecified) long term availability.

In August 2017 an H2+ based Orange Pi R1 has been released with 256 MB DRAM, 16 MB (128 Mb) SPI NOR flash, XR819 Wi-Fi replaced with RTL8189ETV and 2 Fast Ethernet MagJacks. One is connected to H2+ internal Fast Ethernet PHY while the other is connected to an onboard RTL8152B USB Ethernet controller attached to usb1 (the Type A receptable is missing on this board since replaced with the second Ethernet Jack). No PoE option any more.

In October 2017 an H5 based Orange Pi Zero Plus has been released. The Plus variant differs from the original by having the H5 SoC instead of H3, gigabit ethernet support (Realtek RTL8211E), and WiFi 802.11 b/g/n provided with RTL8189FTV instead of XR819.