"R69" logo embossed on top cover of the device with a green border.

In Android my version (bought 08.11.2017 ships from China) shows, under Settings->About box, you will find:

My version shows in Android,

A later version (using a blue PCB, and MLC NAND), ships with a much newer Android:

There used to be Armbian-based builds available for this box as CSC-builds (Community-supported) for kernel versions 5.3 ("current") and 5.4 ("dev") as of December 2019.

There are at least two versions of the PCB. Earlier builds (2017) use a red PCB and contain (perfectly usable) eMMC storage, but the later blue PCB (2018) seems to be shipped with raw MLC NAND flash, which is not supported in mainline U-Boot or Linux. Both version still carry the footprint for both eMMC and MLC NAND, so variations are possible.

The R69 is configured to boot from µSD first, so testing an alternative OS is simple. Linux images for other H2 or H3 devices can be booted, but provide incorrect GPIO assignments for at least the power LED, USB ports and so on. The most up to date fex file for the device might be in Armbian github repository

The box contains a dual-color LED (blue and red). The blue part works fine, but the light of the red one is almost perfectly filtered by the semi-translucent plastic case, so it is not visible from the outside.

FEL mode can be triggered by pushing the Button inside the AV Jack with a nonconductive tool, like a toothpick while powering the board on. The R69 exposes H2's USB OTG port as a type A receptacle on the back next to the power socket which can be used with a male-to-male type A USB cable. The Board has boot priority for SD Card, then eMMC. FEL Mode can also be entered with a special SD card image.

According to vendor fex no voltage regulation is implemented and the CPU cores are fed with 1.2V which allows the H2+ to be clocked with 1008 MHz maximum. 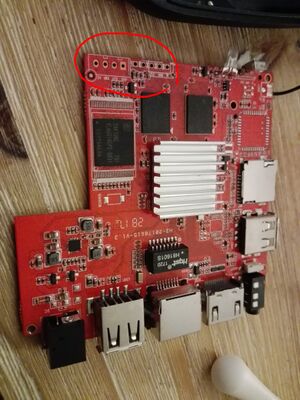 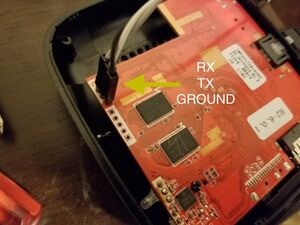 UART pads back side

The R69 UART runs at 3.3V levels, so you need a level converter (e.g. MAX3323) to connect the board to a regular serial port. Alternatively, a USB-to-UART adapter with 3.3V levels will also work. See the UART howto for details.

The case is clipped together using plastic tabs on all four sides. Please see the Plastic tool howto for details of opening cases like these. The PCB is held in place by three small Philips-head screws. Make sure to remove the µSD card before taking out the PCB. The H2+ chip is attached to an internal heat sink using a thermal pad.

The UART (3.3V levels) is available on four solder holes (2mm spacing) in the front side. Soldering in a header will void the warranty.

Alternatively the UART pads can be accessed from the back of the board, without removing it from the case. Temporary headers can be friction fit with sufficient stability.