This is a brand name tablet from a reputable hardware vendor, so no problems with identification are expected. The tablet has a sturdy metal back cover and the overall build quality is good. However the TN display has relatively poor contrast and viewing angles (at least when compared with IPS displays), the wireless antenna is poorly connected (center and shield are sometimes shorted!), and the battery is hard-soldered to the mainboard.

There is a clearly visible MSI PRIMO 73-031PL label on the back of the tablet. It simply can't be mistaken with anything else.

Information about the Android firmware: http://www.androiddevice.info/submission/18728/show

Supported by the legacy u-boot-sunxi and sunxi-3.4 kernel. LCD display works. WLAN, touchscreen and accelerometer are untested yet.

The mainline kernel support is seriously hindered by the missing USB OTG driver. But WLAN can be used to connect with the outside world and at least do something semi-useful with the device. HDMI works. The LCD display is supported by recent patches, but they have not landed to the mainline releases yet.

Supported in the mainline u-boot git 'master' branch and scheduled for the v2015.04 release.

For building mainline u-boot, use the MSI_Primo73 board name.

A patch has been sent to the mailing list and if it gets accepted, then it will be possible to use sun7i-a20-primo73.dtb.

For now, you can download the patch and apply it manually:

If you used git to download your kernel, you can apply the patch using the following line-- which should be executed from the directory where you've cloned the kernel:

If you downloaded the kernel source without git (e.g. by downloading a tarball), you can apply the patch as easily:

You can then build the kernel via the instructions in the Mainline_Kernel_Howto.

The VOL+ button triggers FEL mode. Actually both of the volume control buttons are directly connected to the UBOOT_SEL pin and drive it low when pressed, as can be easily verified by reading the BOOT_SEL_PAD_STA bits from SRAM_VER_REG. This is nice, but does not add any extra unbrickability value, because the SD card has the highest boot priority on any A10/A13/A20 device and already can be used for recovery.

Use as a GNU/Linux desktop machine

A MiniHDMI cable can be used to connect a big desktop monitor. Something like a USB OTG Charging Hub accessory may allow using USB peripherals (keyboard, mouse, ethernet adapter, etc.) and supplying power to the tablet at the same time. This setup works fine with the legacy sunxi-3.4 kernel.

Note that the USB OTG support is still not ready in the mainline kernel at the moment.

A serial port is a near-essential tool when developing for the Primo 73, as the tablet only has limited support for external keyboards and mice via USB OTG. It may be possible to get by without one-- but for any serious development, you should strongly consider adding a UART ("serial port") and saving yourself the trouble.

Fortunately, there are two methods for adding a UART to the Primo 73:

Both methods require use of a 3.3.V LVTTL serial to USB cable (or a 3.3V to RS-232 level changer, if your computer has a serial port). 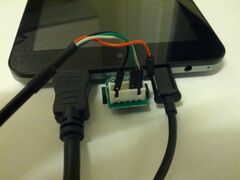 It is possible to temporarily abandon the SD card slot and instead gain UART serial console by using a MicroSD Breakout accessory. This is useful for low level u-boot/kernel debugging without any need to dismantle the device. Even without the SD card, the system (u-boot + kernel + initramfs) still can be booted over a MicroUSB cable by using the FEL/USBBoot mode provided by BROM.

To get this working, you'll need a MicroSD Breakout, and the patience to make several minor changes to the u-boot and kernel configurations. You can find instructions and more information about the process on the MicroSD Breakout page.

If you've decided to add a hard-wired serial port, you'll need to disassemble your tablet. It is assumed that the reader has some experience with disassembling electronic devices--- and is aware of the fact that disassembly will likely void their device's warranty. A careless disassembly may also damage your tablet, so be careful!

To open the tablet, you'll need the following tools:

To open the device, place your plastic tool between back and front housing pieces and push them apart. It's suggested that you start near the connectors at the top of the device-- near the front cameras-- and gradually work your way to the bottom. Be careful not to slide your plastic tool in too far-- you don't want to press against the LCD screen or battery.

Once the back cover has been removed, the device has been laid bare! You'll likely want to remove the various insulating and heat-sink stickers; but be careful to note their positions-- you'll want to replace them before reassembling your device.

Three screws must be removed to remove the mainboard.

Unfortunately, the UART headers (and all of the other test points) are located on the back of the mainboard-- so you'll need to remove the mainboard in order to access them. This is made more difficult by the wireless antenna and battery, which have been soldered directly to the mainboard rather than using a more robust connector. Note that, due to the battery, parts of your device will remain on as you work-- so you'll need to be careful not to short anything out!

Next, remove the mainboard from the chassis: 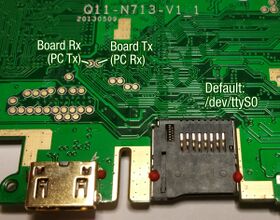 The primary UART is brought out to a pair of test points on the back of the mainboard.

Next, flip the board over, and carefully remove any of the insulating tape pressed against the bottom of the board. Be careful to note its location-- as you'll need to put it (or something equally flat and nonconductive) over the exposed pads during reassembly. You should now see a multitude of test points exposed!

Using the diagram to the right, identify the receive (Rx) and transmit (Tx) test pads: you'll likely want to solder thin wires to these pads, so you can use them for development. Wire-wrapping wire tends to work particularly well for this kind of prototyping; they can easily be routed out of the device.

Solder wires to each of the following locations:

If you opted not to disconnect the battery, be careful not to short anything! Your soldering iron, wires, and solder should only ever touch one contact a at a time! Be sure you have all cables disconnected, so your board isn't grounded: most soldering irons have grounded tips.

Bringing out the UART 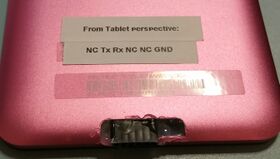 The unpopulated "dock connector" slot is an excellent place to bring out your UART. Nothing says "I'm serious about linux development" like a pink tablet with a custom debug header!

Once you've soldered in your UART, you're ready to bring the signals out to a place where you can get to them! Fortunately, the Primo 73 seems to have an unpopulated cutout in the bottom of its case-- perhaps intended for a dock connector-- which comes filled with a plastic placeholder. The placeholder is simply taped in, and can easily be pushed out-- leaving a nice location for a debug header! If you have a female socket that will fit in that slot, you can make a debug header which keeps the device relatively portable (for Linux development on the go, of course!).

Once you have your UART brought out, you'll likely want to connect to your PC and try things out! More information is available on the UART page.

Pictures of the MSI Primo 73, in and out: