The Libre Computer Board ALL-H3-CCs are H2+ / H3 / H5 powered development boards originally introduced via a Kickstarter campaign in 2017.

Points distinguishing this board from others:

This board is produced in white colour and has 3 variants that only differ in SoC/ram used:

The boards are supported by both mainline U-Boot and kernels.

Three build targets are provided, one for each board version:

Three device-tree binaries are provided, one for each board version:

USB-OTG port is located in one of USB-A jacks. That's top left one on v1.0.

The U-BOOT button next the the µUSB connector triggers the FEL mode.

The board has three LEDs:

Based on the schematic Rev 1.0 (November 17, 2017) the board incorporates the following protections: 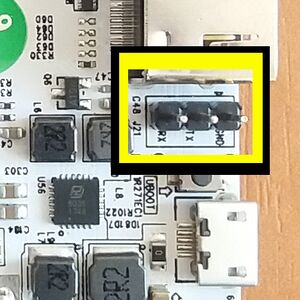 The UART pins are located between HDMI and power jack on the board. Marked on the PCB (simplified layout: ..board-edge..GND|TX|RX. Just attach some leads according to our UART Howto.