The Lamobo R1 is a A20 based development board by Lamobo. It shares the majority of hardware with the original Banana Pi. It makes not only a nice home automation hub or a NAS but with its on-board VLAN-capable switch, this should make a nice router board as well behind a firewall.

The board differs from the Banana Pi by having a different layout, allowing directly attaching a 2.5" SATA disk (unlike other SATA capable Bananas here powered through the AXP209 PMU), a VLAN-capable Broadcom BCM53125 switch (see security implications below) interconnecting the SoC and the 5 GBit Ethernet ports and onboard 802.11 b/g/n Wi-Fi. Since the Lamobo R1 features exactly the same 26 pin GPIO connector as Banana Pi and the ported WiringPi library also works here all hardware Add-Ons utilising GPIO will also work.

The Device is also marketed as Banana Pi Router or BPi-R1.

OpenWrt support using kernel 3.18 is currently awaiting upstream. Gigabit Ethernet needs some tickling from U-Boot to properly setup the TX clock delay, the on-board switch works nicely with OpenWrt's b53-mdio driver but there seem to be performance issues when data is transferred between CPU and the outside (traffic bridged by the BCM53125 between switch ports is not affected). The rtl8192cu mac80211 WiFi driver seems to be buggy/not work well with hostapd, however, client and ad-hoc mode works just fine.

Apart from the on-board switch, the board is very similar to the Banana Pi (M1) - thus any OS capable of running on the Banana Pi should work on the R1 as well.

Every image the manufacturer provided so far is broken more or less. These three community projects provide 'ready to run' OS images for the R1 containing .dts/fex files and patches to get the switch working:

To get older kernels booted by recent u-boot versions you have to apply this hack to u-boot sources:

For building mainline u-boot, use the Lamobo_R1_defconfig target. As long as it's not included in mainline u-boot you find a working version including correct CONFIG_GMAC_TX_DELAY and SATA power config here [3]

Use the sun7i-a20-lamobo-r1.dts device-tree file for the mainline kernel. As long as it's not included in mainline you can find it here [4]

To make the switch working, apply the patches from [5]. For 4.0 or above better use these patches including a more recent version of the driver from here [6] (some stuff has to be deleted before as outlined in [7]

A working .config for kernel 3.19.5 can be found at [8]. Since this config doesn't contain CONFIG_FHANDLE=y (necessary for systemd) and some other tweaks another alternative is [9] (ready for 4.0 and above)

There seems to be no button to enter FEL mode. If no SD card is present, the A20 will automatically fall back to FEL mode (as this device has no other means of booting, like e.g. onboard NAND flash). So if you want to enforce FEL mode, you may simply remove the SD card and connect to the Lamobo R1 via the OTG micro USB (the one next to the USB type A port). This also supplies power to the board at the same time that might not be sufficient to power a SATA disk. So you might have to disconnect a SATA drive to use FEL mode.

Some details in the text below:

The Lamobo R1 powers the SATA disk through the AXP209 PMU unlike most other SATA capable Banana Pi variants (a reverse engineered power scheme is available: File:BPi-R1-power-scheme.pdf and in early 2016 sinoVoip even managed to publish their schematics). Therefore the whole board consumption in A can be read out using I2C/sysfs (1st example for use with 3.4 kernel, 2nd for patched mainline kernel):

Since powering the board through the Micro-USB power-in connector is often somewhat unreliable (due to voltage drops between PSU and board and a faulty power design of the board) which can lead to all sorts of strange symptoms a different way to power the board is to use the LiPo Battery connector next to the J12/J13 expansion headers. The AXP209's charger will disable itself when the voltage on this connector exceeds 4.2V so you can inject here up to 6.5V and exceed the 5V/1.8A limitation of the Micro-USB port. If you power the board this way consumption in A can be read out using (1st example for use with 3.4 kernel, 2nd for patched mainline kernel):

With the Lamobo R1 electrical design, the SATA drive is powered from the system supply of the AXP209: IPSOUT. A maximum of 2.5A can be sourced from this supply, which is barely enough to power a SATA drive and the rest of the system when the drive is busy. More specifically, spikes in the current consumption caused by the drive's activity can cause the system voltage and remaining available current to lower below the required minimum for proper operation of the DRAM, that will get corrupted. When DRAM corruption happens, the kernel soon fails to handle kernel paging requests, as the page table got corrupted.

Some of the available OS images for the Lamobo R1 suffer from missing CONFIG_GMAC_TX_DELAY adjustments in u-boot (4 seems to be the best value). This results in bad performance when network packets are transferred between A20 SoC and the outside. Even with correctly set GMAC TX delay settings the network throughput is bad compared to the combination GMAC+RTL8211E (with optimised TCP/IP stack tuning noone achieved more than 370/460 Mbits/sec TX/RX using iperf with 100% CPU utilisation -- maybe due to problems with the b53 driver used?).

When Wi-Fi and a SATA disk is used the temperature of the AXP209 PMU will increase even more compared to other Banana Pi variants. The BCM53125 switch IC that is also on the bottom side of the PCB gets hot as well. Since a SATA disk on the top side of the PCB will be directly above the BCM53125 operating the board horizontally is no good idea. Especially when an enclosure is used that doesn't provide any airflow around AXP209/BCM53125. An example for an enclosure with good thermal design (vertical orientation and use of convection -- unfortunately only available in Taiwan) can be found in the gallery below.

On the Lamobo R1 the BCM53125 (a simple switch IC that features two RGMII GbE host ports and 5 GbE PHYs and can be configured through MDIO to separate traffic through VLANs) interconnects by default all 5 Ethernet ports and the A20 SoC. This means we can not speak about a true WAN port and LAN ports since all the ports are connected at network layer 2 by default. Since the A20 SoC features only one single RGMII interface no other mode of operation is possible (illustration available).

This might raise serious security risks since while the device boots or when it is in bricked state or booted without SD card or when VLAN configuration hasn't been setup correctly or a simple bug exists in the b53 driver then the BCM53125 always acts as a primitive layer 2 switch forwarding Ethernet frames between all external Ethernet ports (not differentiating between the so called WAN port and the 4 LAN ports). Since this device in fail state always bridges the networks it should separate instead of building a barrier it simply can not be considered a router between the so called WAN port and the other Ethernet ports. It's just a switch!

If one tries to use the R1 as a (NAT) router without a separate firewall between WAN and the R1 then it depends largely on the ISP's infrastructure whether this is not that good or an absolute no-go from a security point of view since all sorts of attacks against devices behind the so called LAN ports can be triggered from behind the WAN port. In case you're not sure what that means you should simply treat the WAN port as another LAN port and use a separate USB to Ethernet adapter to be connected to WAN. Only in this mode the R1 might reliably work as a router.

Kernel sources include documentation for configuring the BCM53125 (B53) and DSA in general:

Using a kernel that supports tagging makes the configuration much easier.

See this thread from Armbian build tools for older discussions on the topic.

The Lamobo R1 uses the very same 26 pin GPIO connector with identical pin mappings like the original Banana Pi. In case you plan to use Add-on boards be aware that due to the orientation of the connector Add-ons will project over the board in the opposite direction than intended. See the gallery below for an example. 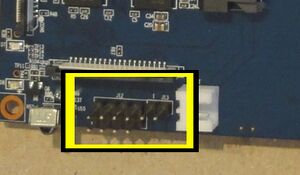