Awaiting patches. Linux can be booted by using boot images for a20-olinuxino_micro with script.bin from the k901c's internal flash. The USB OTG port does not work though. 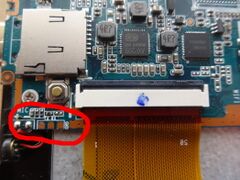 Carefully insert your Plastic tool between the front and back covers, and gently push the back cover outwards, until you hear the clips release. Go around the whole device.

A set of clearly marked UART pads are available right next to the reset button and the SD-Card slot. All you have to do is solder on some wires according to our UART howto but this is not comunicating 115200 N81.