Only partially working are:

Currently broken for A20 is:

No drivers or suitable dts are readily at hand for the following devices: 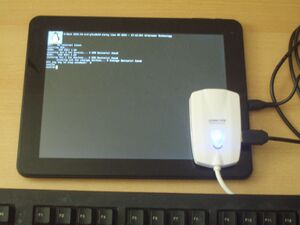 U-boot showing its dialog on the LCD.

A patch is currently under review.

Until the patch and new various features hit the main repository, use the following u-boot as mainline:

In particular, this allows an u-boot dialog using an usb-keyboard and the tablet's LCD.

Use the sun7i-a20-inet-k970.dtb (once accepted) device-tree file for the mainline kernel.

Like with most Inet-tek tablets, a reset button is available through the pinhole on the back.

tablet with opened back cover

While the UART is located as delineated below and works properly, note that this is an option, and I'm not advising to use it. I fact, I for one was not able to get the touchscreen going again, after reconnecting the ribbon. In case you do need an UART, which I didn't, you might want to consider using a less intrusive approach, e.g. the MicroSD_Breakout. Additionally, current mainline U-boot provides output to HDMI, until you have setup LCD parameters.

To open the tablet, first remove the two screws on the connector's side. As the picture aside shows, the back cover can most safely be lifted from the side opposite to the connectors. Try using a Plastic tool. A spool-like tool, shown with the opened device, worked better for me. Before trying to open the tablet, notice the eyelets on the back cover clearly visible both at the cover itself and its shadows. I found it best to open it first at one of the loops in the middle. Further take care of the speaker cables when lifting the back cover. 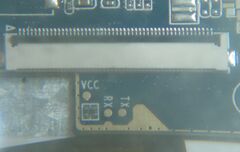 The RX,TX pads are hidden under the touchscreen ribbon located on the right side of the board's front picture. To remove the ribbon, lift the connector's lever visible as a narrow dark bar at the upper edge of the white connector. The ribbon is released then and can be pulled out of the connector without force. The GND is textually marked at another place on the board close to the right upper edge of the board's front picture and connected to the large copper area. See the gallery below for details.