WiFi reception is very poor probably due to bad antenna.

Detected by kernel but needs testing:

Alternatively, there is a pad labeled u-boot near the wifi. Connecting this to ground also triggers FEL mode. Pads for a UBOOT button are also available on the board. 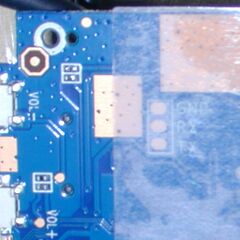 UART pads (under the plastic)

Some pads are available on the board, but they are multiplexed with the SD card. So use a MicroSD Breakout board. The ones from Sparkfun or DX should work with the cover on, but you have to remove the back cover to attach the cubietech one.

Be careful to first remove the SD Card.

Make sure the USB port is inserted into the cover first when reassembling.

UART is marked on the bottom of the PCB (between the PCB and display) and on the top under the tape holding ctp connector. Both connect to the SD slot so you can as well use a SD breakout board. The FEX file does not enable UART.

UART1 pins are used for CSI and connected to a 24pin 0.5mm pitch FFC connector which is used for camera. Probing with a multimeter confirms that the console pins seem to be connected somewhere around the middle of the connector. The pitch is the same as IDE ZIF connector but IDE is 40pin.

It is possible to use a generic ffc and an IDE ZIF to 3.5" adaptor to connect to the pins routed to CSI. I can confirm using the u-boot gpio command that the pins actually connect to the ide connector when the cable is inserted properly but I cannot get the console working. Unfortunately the 24pin cable gets loose easily in 40pin connector.

Rev1.0 was marketed as