There is neither mainline U-Boot nor mainstream kernel support at this point.

The VOL- button triggers FEL mode. This is the third button from the top on the right edge of the device. 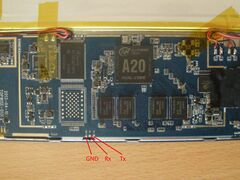 Opening the device is really straightforward. There are two Phillips screws to remove on top of the device and once these are out, the back aluminium case can easily be removed using a plastic tool to pop a few pins.

The UART pads are clearly labeled on the PCB: GND, Rx, Tx. These pads are located on the edge of the board, left and below the RAM chips. All you have to do is solder on some wires according to our UART howto.