NanoPi M1 is H3 based development board produced by FriendlyARM. Feature-wise it is very similar to Orange Pi PC.

Almost square board, blue soldermask, ⌀3mm mounting holes in the corners. 3 x USB type-A, Ethernet jack (with integrated magnetics) and four-pin header for UART/power near one of the edges. Sticker indicating amount of RAM is placed on the lower PCB side.

On the top side of the board, next to H3 SoC, the following is silkscreened:

(on LinkSprite's OEM variant 'pcDuino4 nano' can be read instead)

The H3 SoC support has matured since its introduction in kernel 4.2. Most of the board functionality for boards such as NanoPi M1 are available with current mainline kernels. Some features (hw accelerated crypto, hw spinlocks, and thermal) are still being worked on. For a more comprehensive list of supported features, see the status matrix for mainline kernels. In addition, legacy 3.4 kernels are available in various work-in-progress git branches.

Use the nanopi_m1_defconfig build target (supported since v2017.07) build target. The U-Boot repository and toolchain is described in the Mainline U-Boot howto.

No FEL button. The device falls into FEL mode when no SD card is inserted.

The board has two LEDs, mounted on the top side next to the audio jack:

NanoPi M1 uses the same voltage regulator as Orange Pi One/Lite switching between 1.1V and 1.3V (SY8113B datasheet). Unlike the Xunlong boards which contain a thick copper layer inside the PCB to spread heat away from the SoC FriendlyARM chose a different design. This and maybe the smaller PCB size lead to higher temperatures compared to Orange Pis and in case you want to operate the M1 under constant high load think about adding a heatsink 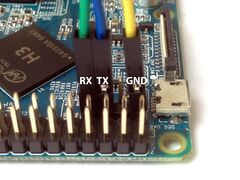 Four-pin UART0 header is placed next to 40 pin GPIO header. Pinout: GND, 5V, TX, RX. Pin 1 (GND) is the one next to Micro USB connector. Logic voltage is 3.3V. For more instructions refer to our UART Howto.

FriendlyARM introduced an improved version, the NanoPi M1+ in March 2017. This variant adds with 802.11n WiFi, Bluetooth, and integrated eMMC. All the connectors except for the micro USB OTG and camera ports are also on one side for easier access. The third USB port is provided via additional header pins. The positions of the HDMI and Ethernet ports have also been switched.

Based on the schematic Rev 1702 (May 18, 2017) the board incorporates the following protections: