in a later version

Support is work in progress. Patches have been posted to the mailing list, a repository with those patches is available.

Any recent kernel with H6 support should work. No mainline .dts yet, use the .dtb as provided by U-Boot, by using $fdtcontroladdr when specifying the DTB address.

Despite being a TV box shipped with Android and the Play Store plus other sensitive apps, the box is completely open. It boots normal eGON images (as created by U-Boot) or boots happily into FEL mode with the FEL button pressed. When booting the shipped Android system, you are greeting with a prompt on the serial line. If you have the RX line fix in place, you can explore the system. A dauntless "su" will give you root privileges for full system access.

To get a root-shell in the shipped Android system without hardware modification (uart and a serial line) via tcp instead, you can install temporarily and start com.jaja.remoteadb. Connect from a external PC with an installed adb

You can remove com.jaja.remoteadb, after adb is permanently listening to port 5555

There is a small hole between the two USB ports, the button behind it triggers FEL mode when held down while resetting or powering up. On the PCB there is written "UBOOT" near this button. The USB 2.0 port will act as the OTG device, you need a USB-A <-> USB-A cable for FEL mode (same as the Pine64).

If you copy the original spl from internal eMMC to an empty sd-mmc between 0x2000 and 0xa000 the box with this sd-mmc inserted will fall into FEL mode automatically:

You will find the original spl in the ota-update zip as file named boot0_sdcard.fex with size 32768. 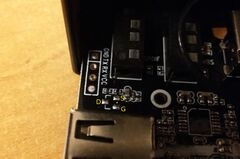 H6 Mini UART pads, next to the SPDIF connector. The SOT23 footprint is marked with the (missing) FET pin names, bridge "S" and "D" to enable the RX line.

There are clearly labelled UART pads on the PCB, please refer to the UART howto for more details on using a serial port. There is some space near the microUSB power supply socket to drill a small hole and lead the three needed cables through.

The RX pin doesn't work out of the box, as there is a FET missing on the PCB. Normally this FET gates the RX line when the device is off, preventing it from leaking power into the system and allowing a proper shutdown and reboot. However this FET is not populated, so the RX line is not working initially: You can't type anything, but see all messages. To fix this either bridge the pins labelled "S" and "D" in the picture to the right, or solder a proper FET to the SOT23 footprint. 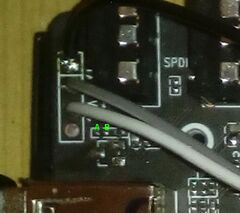 H6 Mini UART pads, next to the SPDIF connector. The resistor footprint is marked with "A" and "B", put a 10kΩ between "A" and "B" to enable the TX line.

On the v1.2 the TX pin doesn't work out of the box, too, as there is a resistor missing on the PCB. You can put a 10kΩ resistor in between the pins labeled "A" and "B".

To open the box, turn it upside down, gently slide a plastic tool or a knife in the small gap around all edges of the box to eventually lift the bottom plate. There is no need to remove the rubber feet. Then unscrew the four screws securing the PCB. To remove the PCB, first lift the side with the 7 segment display up (use a knife or similar tool), then gently pull the PCB out. This is needed because the backside connectors are somewhat locked into the case.

The UART pins are located in the upper left corner on the top of the PCB, near the SPDIF connector. They are the usual 3.3V GND/TX/RX/VCC pin, clearly labelled as such. As usual, the VCC should not be needed.