On the back of the device, the model number is clearly visible (Model: A741)

In adb shell, the device identifies itself as astar-m86

The kernel normally boots in 'silent' mode, without printing anything useful to the uart. The debug mode can be activated by powering on the tablet with the Vol+ button pressed, and, while holding the button, plugging and unplugging the power/usb cable several times.

The Vol+ button triggers FEL mode. Other boot sources still take priority (microSD), indicating that this is not a proper FEL button, only a function of the bootloader in NAND.

The device has two screws on the connector side, and the cover is 'clicked' on the screen. After removing the screws, the cover can be easily removed using fingernails or a Plastic tool howto. Inside the board is mounted using three screws. 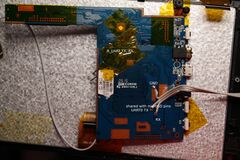 Two uarts' pins are available on the back of the board, see the picture on the right for reference.

UART0 is used by the ROM bootloader and android bootloader, it is however multiplexed with the microSD socket. The preinstalled bootloader doesn't respond to keys received on the RX pin.

R_UART is free to use, but needs to be specifically enabled in your own uboot & linux image.