The Ainol AW1 is a cheap 7" A20 based tablet that comes with an SPCI connector, allowing a 3G modem module to be plugged in.

Supported, but lacks mainline kernel support, and some features are missing under our sunxi kernel.

Use the Ainol_AW1" build target.

Use the Ainol_AW1 build target.

The device has a SPCI modem connector that allows connecting a specifically designed 3G/4G/Voice module. An example of such a modem is the Huawei E1220, which sometimes gets sold with this tablet. 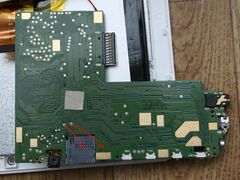 The plastic back case is very easy to open. There are no screws but only a few clips that are easy to pop: you probably don't even need a plastic tool for this.

Once the PCB is exposed, there are 4 Philips screws to remove on the lower part of the PCB. You must also remove the LCD/touchscreen connections by lifting up the black parts on the connectors and releasing the flexible flat cable, on the top-right part of the PCB. At this point, you should be able to flip the PCB to the right, exposing its back.

A black isolant sticker covers the back of the PCB: remove it for now but don't forget to put it back later, as it isolates the many test pins from the conductive surface of the back of the screen!