The board has "A20-M1303 V1.6" printed on it. (There are some other devices existing with different versions numbers such as '10moons T2', '10moons LT390W Android' but they have a completely different form factor.

Wrong! You need to add a new uboot config according to the New to the New Device Howto

The USB port next to the µSD slot is the USB OTG port. Use the button marked K2 to trigger FEL mode. 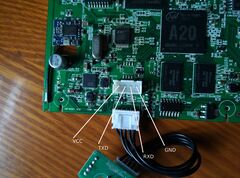 Just remove all screws at the bottom.

There is a nice 4 pin 2.54mm pitch JST-PH connector labeled J5 as its UART0 port. Just attach some wires according to our UART howto.

Take some pictures of your device, upload them, and add them here. DO NOT UPLOAD PICTURES WHICH YOU PLUCKED OFF THE INTERNET.