The Rubix A10 can be used standalone as a Linux-powered SoC single board computer, and/or as a stackable "Arduino PC shield" (little Linux PC attached atop Arduino; develop code in IDE and upload to the attached Arduino.)

The black printed circuit board reads on top side, upper right corner:

The lower left corner near the DC 12V connector reads:

On the back of the board near the center, the following is printed like a stylized logo as on the original packaging:

and beneath that logo it reads:

The PCB has the following miscellaneous info silk-screened on the back of it:

Device shipped with Linaro Linux Desktop installed to the NAND FlashROM; kernel 3.4.x.sun4i+. It seems to be a blend of Linaro and Lubuntu 12.04. First boot hung and corrupted the NAND; subsequently booted it successfully using the same image but from microSD. Hardware support seems to be fairly complete, using supplied legacy kernel, though much more poking and testing to do. A search of Mainline Linux kernel did not reveal any .DTB or KConfigs or any mention of Rubix A10 though there are numerous other boards with this chipset in Mainline, with varying levels of hardware/device support.

As of this writing, these Dropbox links still work, and from these, you can download the original Uboot (.img), the bootloader (.img), the entire filesystem (.tar.gz) or the entire OS bootable image (.img.gz) ready to dd onto a micro SD card and boot.

Caveat #1: This device seems quite uncommon; searching internet for days reveals a very thin assortment of threads on Arduino forums (literally about two threads), there's no community like with Pi or Arduino, barely a mention of this board anywhere except a few places including online stores which still apparently have some Rubix in stock, for sale at wildly varying prices.

Caveat #2: Nothing is included in the box: no paper instructions, no SD card, no power cord or adapter, etc; nothing in there but the Rubix board, with the OS on its NAND flash ROM. And as of this writing, the SmartRubix website is defunct, so today it would be probably quite impossible to get official help or customer support. On the bright side, I will be adding here some helpful instructions (mainly Linux shell commands & procedures) from Rubix, which I have found on the internet, regarding repairing or installing the original OS to NAND or SDcard, details about the partitioning scheme, and how to rebuild or customize the original OS. 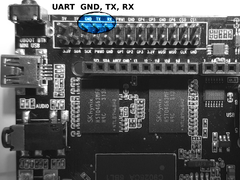 The RX, TX, GND pins are within the 26-pin Pi-type header near the top of the board (see image to the right). See the [UART howto] for info about connecting to a UART using a serial terminal. 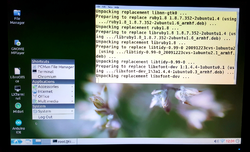